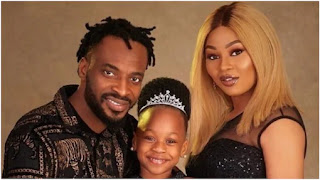 Reports claim that singer Abolore Adegbola Akande, popularly known as 9ice is set to tie the knot a third time.


The singer is set to marry his baby mama Sunkami Ajala, whom he has a daughter with, and reports has it that the wedding is slated for December 30, 2019. And this will be 9ice’s third marriage as he will be tying the knot with his baby mama, Sunkami Ajala.

Further reports have it that the wedding which is slated to hold on December 30 is having stumbling blocks as the musician's family is kicking against it. No official statement has been released by 9ice but he has photos of himself and his alleged bride-to-be as well as his daughter, Michelle shared on his Instagram page, reports Legit.

Many fans still remember how 9ice married his American sweetheart in 2018 over Skype. The couple has a child together and just a year after, he set to remarry and this time, he is settling with his baby mama.