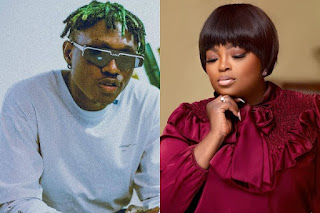 
The Zanku master made the plea during a live Instagram session, for him to showcase his dope acting skills.

During the Insta live video, the actress said a prayer for Zlatan in Yoruba which is paraphrased as: ‘We will both remain successful, may we not be put to shame, God has made us the head, may we not fail, Zlatan,’ and the singer didn’t fail to affirm with a faithful ‘Amen.’

The after some other pleasantries, Zlatan said: “Please ma, don’t forget me for the next episode ooooh,” and Funke smiled, though promising not to forget him.