Home music News/Gist Rapper T.I.’s Daughter, Deyjah Harris, Unfollows her dad on social media after going public with how he monitors her virginity.

Rapper T.I.’s Daughter, Deyjah Harris, Unfollows her dad on social media after going public with how he monitors her virginity. 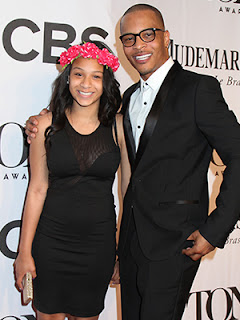 Deyjah Harris reportedly unfollows her father, T.I., on social media in the days following his controversial remarks about attending her gynecologist appointments.


While the timing isn’t clear, the 18-year-old’s decision came in the days following her father’s controversial comments about attending her annual gynecologist appointments, where her father had routinely asked about whether her hymen was intact. Along with unfollowing T.I., Deyjah does not appear to be following Tiny Harris, T.I.’s wife and Deyjah’s stepmother, either.

As fans know, the controversy stems from details T.I. revealed on the Ladies Like Us podcast. “Deyjah’s 18, just graduated high school now and she’s attending her first year of college, figuring it out for herself. And yes, not only have we had the conversation, we have yearly trips to the gynecologist to check her hymen,” he explained during the episode, titled, “Life Hacks,” writes Hollywoodlife.

Naturally, the comments struck a chord on social media and with the general public. Even Deyjah had a subtle reaction to the revelation.

In the days following the podcast episode and subsequent scrutiny, Deyjah took to Twitter to ‘like’ comments made by critics of her father. One of the comments Deyjah ‘liked’ read, “this is disgusting, possessive and controlling *whew*,” while another fan commented on T.I.’s remarks saying, “That is just beyond possessive.”

On Nov. 5, the 18-year-old also took to Twitter, sharing the message, “I loveeeeeee yalllllll” with a sad emoji. A fan offered their support once T.I.’s comments were revealed, sharing on Deyjah’s tweet, “Please know there are so many of us out here who although we don’t know you personally at all, and don’t know a thing beyond what we see on social, we love and support you and empathize with what you’re going through.”