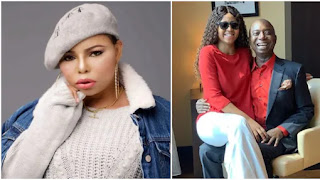 UK-based Nigerian actress, Timmy MacNikol, delves into the marriage of industry colleague, actress Regina Daniels: claiming Regina fell for the’ money’ as she equally revealed how bad her now defunct marriage was.


In an interview with Pearl News, the film star explained that her marriage was an abusive one which drove her into depression for years. MacNikol added that she is not ready to give marriage another chance and if she does, it would be with a man within her age bracket. She also admitted to marrying a very old man because of money, writes Legit.

She said: “I don’t think I want to give marriage another chance, because my marriage experience is very bitter. I have been abused and I kept enduring. I want to move on with my career for now, but you never can tell. I might fall in love. And if I would eventually get married again, it would be a man within my age bracket, not an old man, like I did before. Not marry an old man because of money. I married a grandfather.”

Commenting on fellow actress, Regina Daniels’ marriage to much older politician, Ned Nwoko, MacNikol explained that the young lady’s mother should not be blamed but the manipulative husband because she can relate with the situation.

MacNikol added that Regina fell for money and old men are using their affluence to manipulate young girls who fall for it. She said: “I was same age when I got married to an old man (my ex). I don’t think her mother, Rita Daniels influenced her decision. The person that should be blamed is the manipulative husband because this is exactly what happened to me. Old men are always using money and affluence to manipulate young girls and they fall for it. I was a victim too. Regina fell for the money, I was an orphan and I feel for an old man because of his wealth and affluence.”