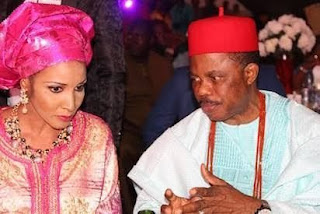 The wife of late Chukwuemeka Odimegwu Ojukwu has described governor Willie Obiano as an ingrate. She maintained that the governor has consistently failed to honour her late husband, in spite the fact he ‘Obiano’ rode on the popularity of her late husband's goodwill to become the governor of Anambra state.


Bianca Ojukwu has condemned the absence of the governor of Anambra state, Willie Obiano, at the second memorial lecture of her husband in the state. Bianca while speaking during the lecture at the Chukwuemeka Odumegwu Ojukwu University (COOU) Igbariam in Anambra state on Monday, November 4, said Obiano who rode on the popularity of her late husband's goodwill is an ingrate.

Describing the governor as the greatest beneficiary of her husband's legacy, Bianca said Obiano was represented at the event by his deputy, Nkem Okeke, urged the governor not to erode the beatitudes left by Ojukwu.

She said: "Tell Obiano that there is no evil spirit in the venue of Ojukwu memorial lecture. This is the second time the event is holding and Obiano doesn’t want to attend by himself."
“Lastly, tell him that he is gratuitously handing over the credentials for history to call him an ingrate, who step on fingers of all the benefactors that held the ladder for him to climb to political power,” she added.

Further appreciating the former governor of the state and the 2019 vice presidential aspirant, Peter Obi, Bianca said Obiano still has some time in office and could still attend the memorial lecture in future, reports Legit.