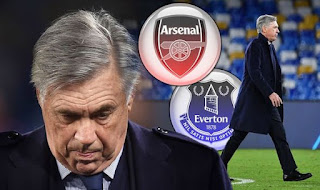 Everton will begin contract talks with Carlo Ancelotti after he was sacked as Napoli manager on Tuesday evening.


Former Everton boss David Moyes could still return to Goodison Park in an interim role, while a new permanent manager is put in place, Sky Sports News understands.
Arsenal are also considering Ancelotti, who managed Napoli for 19 months, to succeed Unai Emery, according to Sky in Italy.

Napoli announced the decision to dismiss Ancelotti an hour after he led the club to the knockout stages of the Champions League with a 4-0 home win against Genk yesterday, 11th December 2019, ending a nine-match run in all competitions without victory.
A Napoli club statement read: "SSC Napoli has decided to revoke the role of first-team coach from Mr Carlo Ancelotti.

"The rapport of friendship, admiration and reciprocal respect between the club, its president (Aurelio De Laurentiis) and Carlo Ancelotti remain intact."

Sky in Italy reported on Tuesday former AC Milan manager Gennaro Gattuso is the leading candidate to take over at Napoli, and is set to sign a provisional six-month deal.
They are also understood to have enquired about Lazio boss Simone Inzaghi, who has led the club to third place in Serie A.

However, he is believed to be happy to stay at Lazio - although he would be interested in moving to England in the long-term.