Home music News/Gist I don’t reply people who are in exile- Timaya comes for Hushpuppi as they troll each other on IG.

I don’t reply people who are in exile- Timaya comes for Hushpuppi as they troll each other on IG.

Nigerian music star Timaya is still getting drowned in more controversy and beef, even now going beyond the borders of the entertainment industry, arising from his earlier post which suggests that his colleagues only patronize fake and local fashion lines, as such, no one should attempt comparing him to them.


Though some of his colleagues in the entertainment industry have replied him, but its  not ending there as flamboyant Instagram celeb, Ray Hushpuppi has waded into the matter.
In a post shared on his IG handle, Hushpuppi noted that he does not like hypocrites.

He said he had approached similar topic years ago and he was attacked by the same individuals that are now criticizing people that wear fake. Though ended up advising celebs to wear whatever they are comfortable with, adding that maturity has now set in and such things do not matter anymore. 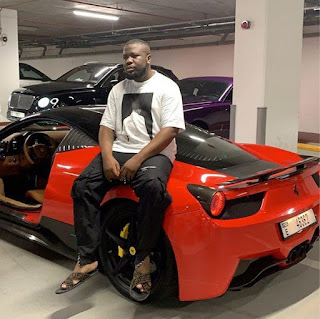 Timaya quickly came back, attacking Puppi, by making an instagram video in which he noted that the individual talking to him does not deserve any response, because he is on exile in another country. He said he should come to Nigerian if he wants a response.

The drama continued as Hushpuppi also made a new video in which he lashed out at the music star: ‘#Hushpuppi Insolent #timaya for calling out fellow celebrities who wear fake designers.’