Home music News/Gist I want an abusive man who will threaten to kill her- Ari Fletcher reveals.

I want an abusive man who will threaten to kill her- Ari Fletcher reveals. 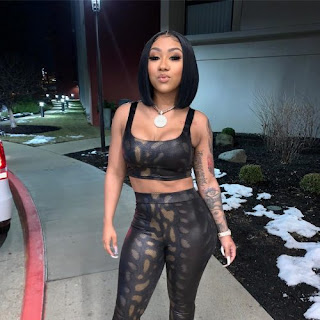 Ari Fletcher, popular for being Chicago rapper G-Herbo's ex-fiancee, has left us wondering on her choice of love as she prefers a violent man being her lover.


Recall that Ari had in the time past made a revelation about the violence she suffered in the hands of baby daddy G-Herbo, and now, we suspect she might as well have enjoyed the violent beating meted out to her by G-Herbo going by her recent post.
According to her tweet: “If you don’t tell me you gone kill me how I’m supposed to know you care...”

Then seeing the comments her was generating, she returned with another post: “Y’all too sensitive, I love me a gangsta ass nigga that got a soft spot for me.”
I just want to feel safe with my nigga, not saying other men can’t protect a woman but a nigga from the streets just more on point. Just my preference."
Funny enough, Ari and G-Herbo had a sour relationship and a nasty public breakup, which led to the arrest of G-Herbo for battery charges after Ari accused him of beating her up- though he has denied ever doing such.