Home Interviews News/Gist I will give every drop of my blood for this job- Mikel Arteta speaks on his Appointment as Arsenal’s head coach.

I will give every drop of my blood for this job- Mikel Arteta speaks on his Appointment as Arsenal’s head coach. 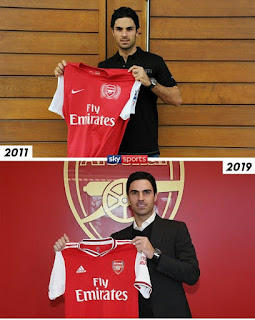 Mikel Arteta wants to implement a culture shift at Arsenal and says he will give "every drop of blood" to make the club better. The former Gunners captain returned to the Emirates as their new head coach on Friday, signing a three-and-a-half-year deal after leaving his role as Pep Guardiola's assistant at Manchester City.
Arteta replaces Freddie Ljungberg, who took over as interim head coach following Unai Emery's sacking at the end of November but failed to improve the club's drop in form, according Skysports.

Arsenal have won just five Premier League games this season and sit 10th going into Saturday's trip to Everton, which Arteta will watch from the stands while Ljungberg takes charge of the team.

Arteta's appointment is seen as "a risk" by some pundits due to his lack of managerial experience, but the 37-year-old says: "I completely understand their concerns. I will give every drop of blood for this football club to make it better.
"If I didn't feel ready for this football club, I wouldn't be sitting in this chair."

Asked what the job means to him, Arteta added: "I feel back at home. I am extremely happy and proud to have been given the opportunity to be the manager of this football club.
"I have been preparing for a few years for this challenge to come. I know the expectations, I know the level and I know the stature of this club and what it deserves.

"I am ready for that challenge and I can't wait to get started and work with the players and everyone at the club.
"I have got a good vibe. I am sensing a good energy today since I walked in." 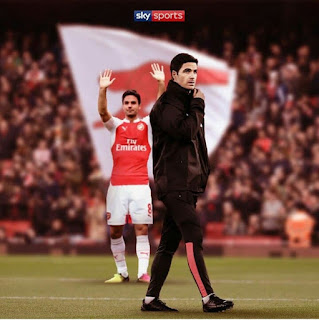 'Pep taught me to be ruthless'

Arteta leaves behind a successful partnership with Guardiola. The pair helped steer City to a domestic treble last season and were in the away dugout at the Emirates on Sunday as the champions beat Arsenal 3-0.

"His (Guardiola's) work rate is incredible," Arteta said. "For me, the secret is that the players and staff have to believe what you're trying to deliver.
"You have to be ruthless, consistent and fit every day the culture of the club to create a winning mentality. Every day is important, every act is important."

When asked what his priorities are, Arteta said: "The first thing is to change the energy. Last week I was here with Manchester City and I was a little down after the game when I felt what was going on.
"We have to try and engage everybody. I need to convince the players what I want to do and how I want to do it.

"They have to accept a different process of thinking. I want everyone at the club with the same mindset.
"We have to build a culture that has to sustain the rest. If we don't have the right culture then the tree is going to shake.

"My job is to convince everyone that this is how we are going to live and if you want to be part of this organisation then it is on these terms and in this way.
"We need an immediate impact, to raise the confidence of the players and finally we need the fans."