Home News/Gist Watch: Richard you cannot get married- Lady disrupts wedding ceremony to slap bride and profess her love for the man.

Watch: Richard you cannot get married- Lady disrupts wedding ceremony to slap bride and profess her love for the man. 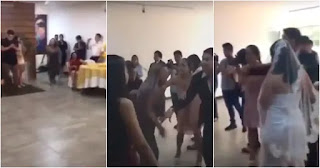 A woman has crashed a beautiful wedding that took place in Mexico City. The unidentified woman was recorded on camera storming to the wedding party to the shock of the guests.
In a video now trending online, mostly on social media, the woman was seen walking fast across the hall to meet the groom and his beautiful bride, taken from Legit. The couple was celebrating their nuptials with their friends and family when the incident occurred. She was captured on camera as she moved towards them screaming hysterically.

In the video, at least three men were spotted rushing to stop her but the woman managed to wriggle out of their arms and caused another scene.
She screamed out loud, professing her love for the stunned groom. She said: "Richard you cannot get married. I love you, you cannot marry."

After professing her love, she runs towards the bride and slaps her on the chic. She was screaming as she did so. She was later dragged out after a man believed to be the groom ordered people to take her out.