Ronaldo absent at the 2019 Ballon d'Or Gala as he wins Best player in Italy same night. 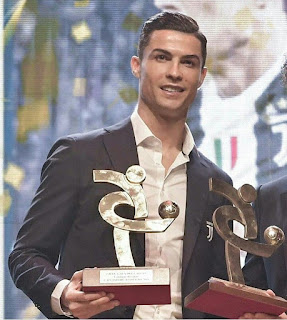 Cristiano Ronaldo was once again absent during the 2019 Ballon d'Or gala, where Lionel Messi lifted his record sixth Golden Ball. But Ronaldo’s absence has now been explained as he bagged two personal awards himself last night in Italy.


This time around, though, Ronaldo did not stay at home as Serie A decided to have their own awards gala, the 2019 Gran Gala del Calcio on the same night as the Golden Ball ceremony.

While Messi lifted his record-breaking sixth Ballon d'Or in Paris, Ronaldo claimed the MVP accolade for the best player in Serie A last season, as well as the prize for the best forward in Italy's top flight, which he shared with Fabio Quagliarella and Duvan Zapata. 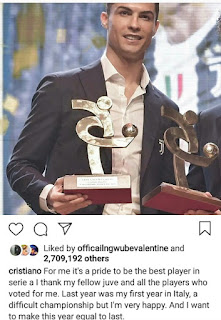