Home News/Gist Rotimi Amaechi denies receiving any pension as ex-Governor as courts asks FG to recover all pension paid to all ex-Governors who became senators.

Rotimi Amaechi denies receiving any pension as ex-Governor as courts asks FG to recover all pension paid to all ex-Governors who became senators. 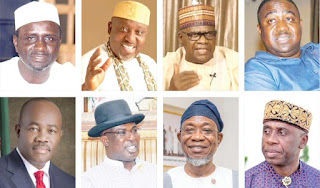 Minister of Transportation and former Governor of Rivers State, Rotimi Amaechi has reacted to a federal high court judgment which directed the federal government to recover pensions and allowances received by former and serving senators as ex-governors.
This comes after the Socio-Economic Rights and Accountability Project (SERAP) obtained the ”landmark judgement" after suing the Nigerian government for failing to seek the recovery of over “N40bn unduly received by the former governors” who are now serving senators and ministers, writes LIB.
Alleged beneficiaries of such pension include Bukola Saraki, Godswill Akpabio Rabiu Kwankwaso, Theodore Orji, Abdullahi Adamu, Sam Egwu, Shaaba Lafiagi, Joshua Dariye, Jonah Jang, Ahmed Sani Yarima, Danjuma Goje, Bukar Abba Ibrahim, Adamu Aliero, George Akume, Biodun Olujimi, Enyinaya Harcourt Abaribe, Rotimi Amaechi, Kayode Fayemi, Chris Ngige and Babatunde Fashola.
However reacting to the court judgement, Rotimi Amaechi who was listed as one of the beneficiaries denied ever asking or receiving pension as an ex-Governor after leaving office in 2015. He added that even if offered, he will politely decline and request that the money be given to Rivers State pensioners.
“I have never requested for or collected one kobo as pension from R/State Govt. If offered, I will politely decline & request that the money should be given to Rivers State pensioners.
“I do not believe that I should receive pension as ex-gov of R/State while serving as a minister" he tweeted.