Spurs ‘Son Heung-Min’ named AFC Asian International Player of the Year for 2019 for the 3rd time. 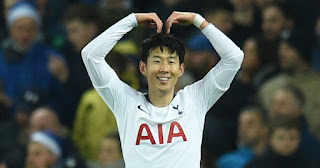 The Asian football confederation annual awards event held yesterday, 2nd December, 2019 in Hong Kong and for the third time in his career, Tottenham Hotspur’s inform forward, Son Heung-Min has taken home the award for AFC International Player of the Year!


He had previously won the award in 2015 and 2017. AFC splits their Best Footballer awards into two: one for Asian players playing for teams within the AFC federation, and one for those who are playing elsewhere (hence “International” player of the year).

While Son won for the International category, Akram Afif, a Qatari forward owned by Sevilla but currently on loan at Al Sadd, took home the Player of the Year award this year.