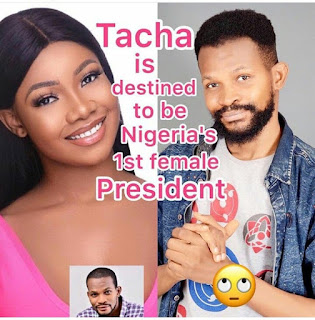 
The actor heaped praises and head busting words on the former BBnaiaj housemate, in which he referred to Tacha as being a great woman who has become more successful than the actual BBNaija winner, in spite being disqualified from the show. He equally went on to attack those who promised Tacha one thing or the other, but failed on their promises.

According to the actor: “Tacha is destined to be Nigeria's 1st female President... #Popcorn endorsement haters are free to write this prophecy down.

#Tacha is a great woman, I #laugh to stupor when I hear some mumu people who can take #pictures for #Africa in front of another person mansion allegedly saying Tacha is a nobody without #BBnaija abeg, is it the same

#BBnaija2019 that disqualified her or which one?
In the #history of BBnaija, a disqualified ex housemate has never become more successful and relevant than its winner, but Tacha broke that record, is that not the hand of God? She gets #world class endorsement deals, and not 'Aunty help us manage am' deals, that’s because God has made her the head and not the tail.” See his posts below… 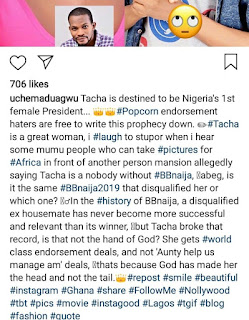 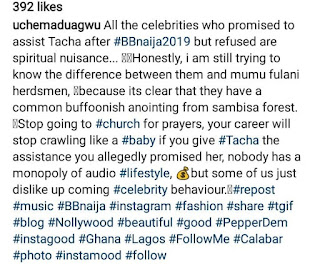