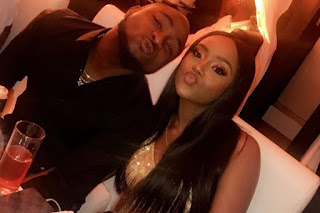 A Nigerian lady has identified as Adesuwa has come up with her own conspiracy theory regards the recent drama between singer Davido, and his first baby mama, Sophia Momodu.


Aadesuwa alleged that Chioma hates Sophia, and as such, she is the brain behind Davido and Sophia's drama.
This is coming on the heels of the recent drama involving Sophia and Davido, after the later gave the former an air lift in his private jet headed for Ghana for the AfroNation musical concert, where Davido was billed to perform.

The photo of the former loverbirds surfaced on social media, stirring up controversies, with man accusing Davido of disrespecting Chioma. The singer released a statement, saying he only gave Sophia a lift since she was headed for same Ghana for a business. See Adesuwa’s tweet below… 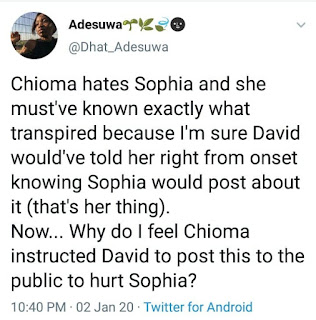