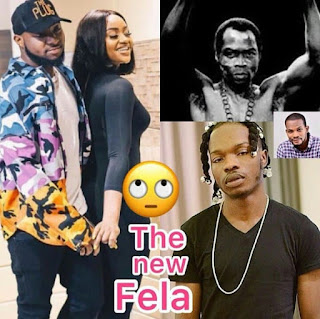 The controversial actor and critic who is known to jumping on issues in the society, and taking a controversial stand has done it again.


He praised Davido for standing with Naira Marley, not minding what the government may do about it, especially as Marley’s lyrics are often anti government. He then went on to berate other singers, who want to attain the late Fela status, but too weak and afraid to withstand government persecution and prosecution. He referred to such singers as ‘low budget’.

In his exact words: “@Davido is the only music legend that treat @nairamarley as the new FELA of Africa, that is why #Marlians every where in the world love him and Chioma...

If the biggest and richest singer in #Africa treat #NairaMarley as the new Fela of Africa, why are some low budget singers carrying their shoulders like #Fulani herdsmen pant? 🤣Some Nigerian singers are so #funny, everyone wants to #dance and #sing like #Fela, but nobody want to go to 'prison' or be persecuted by the government like Baba Fela for the truth and #lyrics of his songs, 🙄Naira Marley passed those test of greatness, he is not an AUDIO Fela, while other singers are busy singing for money, 💰this legend is gradually building a movement of political awareness and mental freedom from the nonsense politicians deceive us with.” 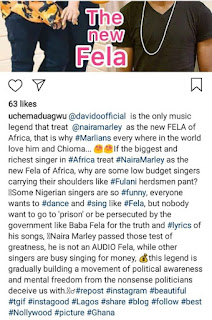