Home Interviews News/Gist ‘The English Press are Talkative’- Arsenal’s Aubameyang clears the air on his future.

‘The English Press are Talkative’- Arsenal’s Aubameyang clears the air on his future. 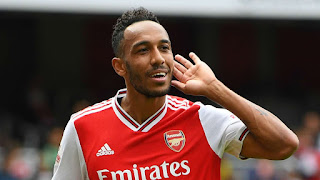 Arsenal’s forward, Aubameyang has come out to hit hard on the British press regards his rumoured move away from the Emirates stadium, describing the English press in the words that suggests there are ‘Talkative’.


The Gabonese striker who has 18 months left on his contract in north London - has been linked with both Barcelona and Inter Milan in recent weeks, but says he is 100% staying at his current club.

Speaking to French outlet RMC Sport after Arsenal’s 2-0 defeat to Manchester United on Wednesday night, when approached on the rumoured transfer, he said: "The English press likes to talk a lot. For now, I'm here. I'm 100 per cent here."