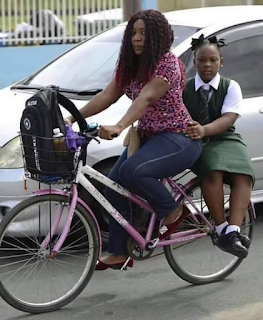 A Lagos State based mother was seen as she proudly rides her daughter to school on a bicycle following the ban on commercial motorcycle (Okada) and tricycle (Keke Napep) in the state by the government.


The ban which affected six Local Government Areas took effect February 1, 2020, and was greeted with severe criticism and protests, but the government remained adamant, sticking with it's earlier decision. 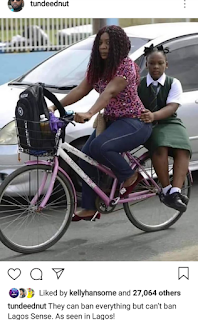 In Lagos State, most persons prefer taking Okada or Keke Napep in order to reach their destination quicker, due to the traffic menace trademark of the state.
Well, Nigerians always know how to overcome whatever situation that comes their way. Simply put, "Nigerians are too adaptive", which is a major weapon of survival in life.