Home News/Gist Life is a game and not a competition- says BBNaija star, Gifty Powers suggesting trouble in her camp.

Life is a game and not a competition- says BBNaija star, Gifty Powers suggesting trouble in her camp. 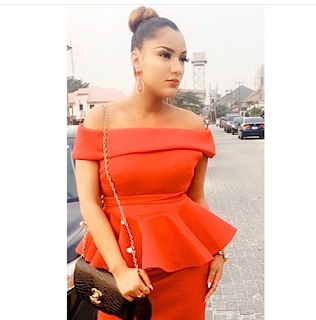 Ex Big Brother Naija housemate, Gifty Powers who has a trademark for controversies, both while inside and out of the house has not been in the news for some time now.


Well, the reality star and mother of one has left many wondering with her recent post, which she say that life is just a game and not a competition, as such one should be prepared to accept whatever he or she gets.

The post may suggest all is not well in the camp of the ex to singer, 2Kay. In her words: “Learn to see life as a game. It is not the competitive aspect of the game that counts but rather the willingness to play, irrespective of whether you win or lose.

When you play a game, you prepare yourself mentally and physically to do your best to win, but even if you lose you can still walk away graciously having enjoyed the game. The challenge that comes with the possibility of winning or losing makes it worth playing. 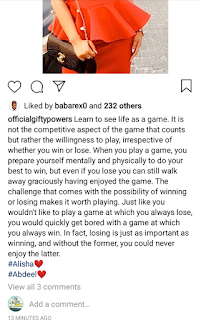