Home Movies News/Gist Corona Virus: God must punish you, if you sell chalk as Chloroquine to people- Yul Edochie warns

Corona Virus: God must punish you, if you sell chalk as Chloroquine to people- Yul Edochie warns 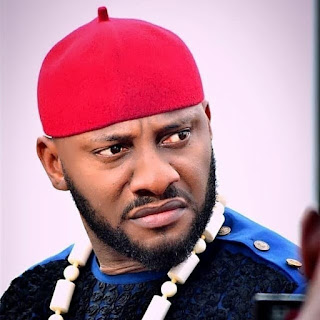 Nigerian actor and politician, Yul Edochie is sounding a serious note of warning to greedy and selfish Nigerians that will attempt selling grinded chalk to people in the name of chloroquine.


The actor, knowing the kind of people most Nigerian business owners are; people who are ready to do anything for money, even if people's lives are lost in the process,of some of them don't really care, as long as the money hitting their bank account, and credit alert sounding on their phones.

Hence, taking all these and more into cognizance, the actor is sounding a note of warning to such persons, that should they indulge in such evil and heinous act of using chalks to mass produce chloroquine just to satisfy their greed and selfishness, that God will never fail to punish them for doing that. 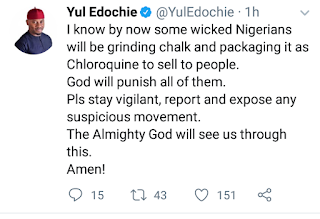 This comes as the US government, through President Donald Trump announced on Thursday, in a video transmitted the Fox news, that the anti malaria drug, Chloroquine can be used for the treatment of the deadly and dreaded Corona Virus.