Home News/Gist Corona Virus: 'I have the symptoms but they refused testing me' - Nigerian youth cries out

Corona Virus: 'I have the symptoms but they refused testing me' - Nigerian youth cries out 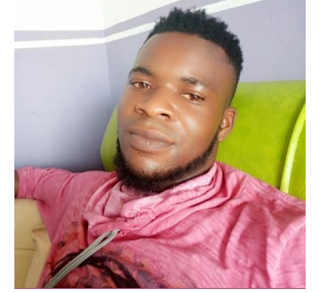 A young Nigerian man identified as Herbmer has called out the Government of Nigeria and the county's Center for Disease Control (NCDC) as he returned unattended to, many days now, in spite showing several symptoms which portends he might be carrying the dreaded Corona Virus.


According to the young man, who works at a big hotel, that play host to many persons from outside the country, hence his fears that he might have come in contact with a career of the virus.
He revealed how he has been to a Government Teaching Hospital in his state of residence (he didn't mention the state name), and that there have been treating him Malaria, typhoid, yet nothing like that as he had done several lab tests.

His fears now are that he is having severe sore throat, headache, coughing and high body temperature, and could be the virus, and may have severe effect in his system if not handled on time. 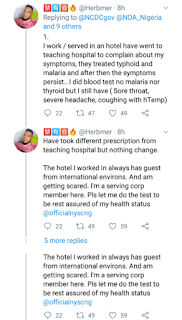 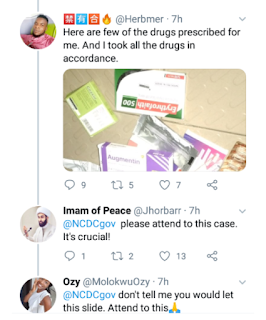 I think the hospital that has been treating him need to be shut down immediately. How can there have such a patient, with all that he mentioned above, then still handling the issue with kid gloves?

Aren't there supposed to make sure he gets tested, yet there discharge him into the society without doing the proper thing, so he can go on infect other people, should it be he is carrying the virus.
This is the height of un-professionalism, especially a health institution for that matter.