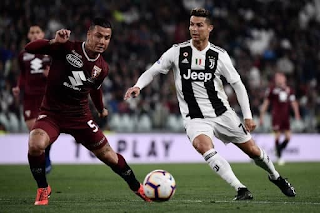 
There will be no action in the Spanish top flight for "at least the next two rounds of matches" as a result of the quarantine of the Real Madrid squad.
Netherlands' top two leagues have also been suspended for the same period.

The 2020 Major League Soccer season - which started less than two weeks ago - has been suspended for 30 days, reports BBC Football.
In Spain, La Liga took action after a Real Madrid basketball player, who shares training facilities with the football club, tested positive for the virus. Real's match against Manchester City in the Champions League on Tuesday was postponed on Thursday. 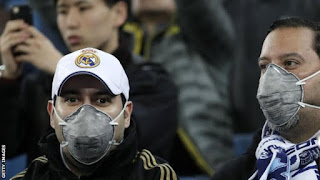 "The recommendation has been made to quarantine both the basketball first team and the football first team, given that the two squads share facilities in Ciudad Real Madrid," a Real statement said.
The Spanish second division has also been suspended and La Liga said it will "revaluate" the situation following the completion of quarantine "in the affected clubs and other possible situations that may arise".

Real, who are second in La Liga, were due to host Eibar on Friday and had already cancelled all pre-match media duties.
Dutch crowds ban prompts Eredivisie: In a statement, the Eredivisie said: "All matches in the Eredivisie and Keuken Kampioen Divisie [second tier] have been suspended for the next two match days because of the coronavirus outbreak."

Ajax currently lead the top flight on goal difference from AZ Alkmaar.
It follows the Dutch government's ban on events of more than 100 people.
MLS suspension follows NBA announcement
The suspension of MLS comes a day after the NBA announced its intention to halt its season.

A statement from MLS commissioner Don Garber read: "Our clubs were united today in the decision to temporarily suspend our season - based on the advice and guidance from the Centers for Disease Control and Prevention (CDC), Public Health Agency of Canada (PHAC), and other public health authorities, and in the best interest of our fans, players, officials and employees.
"We'd like to thank our fans for their continued support during this challenging time."

The decision was made following a meeting with that included members of the league, national federation and players' union.

Italian sport hit hard: The coronavirus outbreak, now declared a pandemic, has led to widespread disruption of sporting fixtures around the world. In Italy, all sport is suspended, including Serie A until 3 April, with the country in lockdown.

Juventus and Italy centre-back Daniele Rugani says he is "fine" after testing positive for the virus, and Reuters have reported that the entire Juve squad will spend two weeks in quarantine.

Two Europa League last-16 first-leg fixtures scheduled for Thursday have been postponed and a number will be played behind closed doors, including Manchester United's trip to LASK.

Wow! I didn't know that corona virus has such a big impact on football. I hope, that the situation will be stable as soon as possible.