Home events If am catching fun with your husband and you disturb us, I will beat you into coma- Bobrisky warns

If am catching fun with your husband and you disturb us, I will beat you into coma- Bobrisky warns 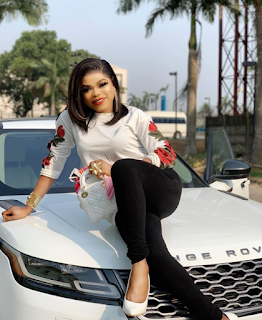 Controversial Nigerian cross dresser, Idris Okuneye, popular with the name, Bobrisky, has a strong message for married women who go about fighting their Husband's side chics.


According to her, if he (or she) is catching fun with any woman's hubby, and the woman approaches him, that he is going to beat her up mercilessly, to the extent she will be plunged into coma instantly. He went further to advice such women to always wait for their husbands to return home, at then, they should settle their scores.

Bob as he fondly called, went ahead to ask such women, "what if your husband didn't tell his side chic that he is married, how will the side chic know his marital status?"

Equally emphasizing his warning again, that if any woman come to fight him because of her husband, that he will beat the woman to the point that hospital will even reject her, resulting from the extent of damages he will inflict on the woman. 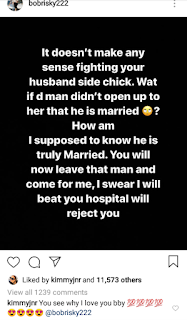