Fans heaps praises on Davido as he intervenes in Cynthia Morgan's matter. 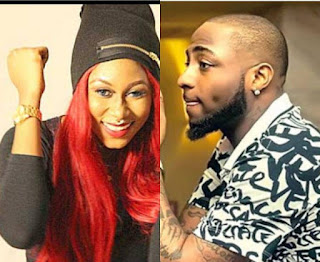 Davido is intervening in the career of troubled Cynthia Morgan, and Nigerians and fans of Davido are so excited as they storm his social media page to heap praises and prayers on him.


Recall that Cynthia Morgan has been trending online since last night, after she held an Instagram video live chat, during which she revealed a lot that has happened in her career and contract with Jude Okoye's Northside Inc.

She revealed how Jude had left her with nothing, and some other issues she raised.
Well, she seems to have found favour again as another music star, Davido is set to help her out, so her career can bounce again. OBO as he is fondly called took to his social media page moments ago to ask Cynthia to reach out to him. 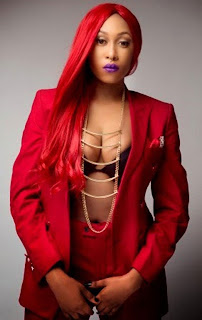 "Cynthia Morgan call me," he simply tweeted.
Since then, excited Nigerians and fans of Davido have been praising him, calling him all sort of lovely names.

"Anybody that hates Davido clearly don’t like the good things of life," Dehkunle of Africa wrote.

"Cynthia Morgan call me,
That’s the Life changing tweet
God bless you Davido
We Rise by lifting others," one Danny said.

"OBO the Greatest, You’re too much Boss. Davido can’t just stop bursting our heads. May God continue to enrich your pockets, KING ADELEKE," another wrote.

"This is why you’re a true king @ davido.You show up for your people, other big artists & label owners have seen what’s going on with her.But you showed up. God bless you . All the people hating, comparing and beefing on u . Will not see your break light," Henry Austin praises Davido.

"Guys I am crying reading this. If u believe this guy's done more than the Nigerian government hit the like button," another fan, Baby Code wrote. See many more below... 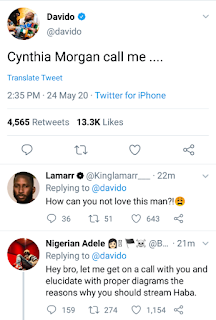 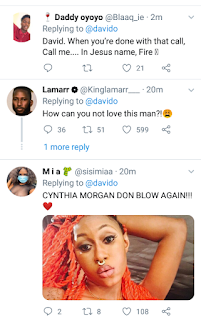 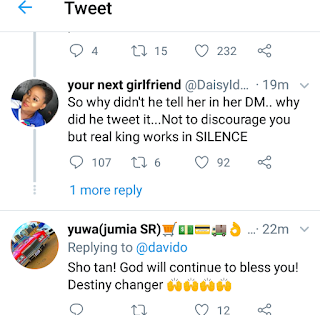 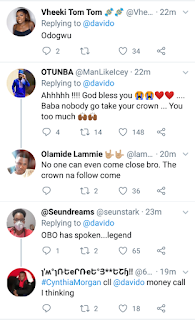 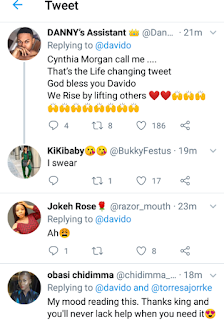