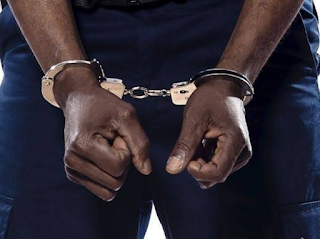 
The now convicted Igweneme had in February of 2018 defrauded one Swiss woman, Chantai Meadery the sum of $240,000 in a love/dating scam, with a promise of building a future together, or better say, a promise to marry the scammed woman.

On laying hands on the matter, EFCC arrested the suspect, charged him to court on the 23rd day of July, 2020 on a 4 count charge bordering on of obtaining money under false pretence, money laundering and others.

Unfortunately for Mr. Igweneme, he was found guilty by Justice A.T Mohammed of a Federal High Court sitting in Port Harcourt, Rivers State, on May 28, 2020, and as such, sentenced to a year behind bars. 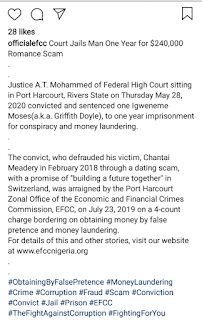 Since the appointment of Mr. Ibrahim Magu as the acting Chairman of the EFCC, the commission have intensified it's efforts in tackling internet fraud, otherwise known as Yahoo-Yahoo, especially amongst Nigerian youths in a bid to redeem the image of the country on the international scene, relating to fraud and other criminal activities.

But the Commission have equally been accused of doing little on corruption cases involving politicians in the country. Though they have secured a couple of convictions against few corrupt leaders/persons in the country.