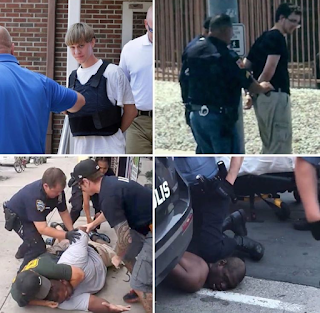 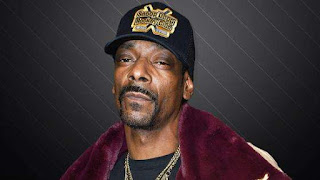 Before Floyd's death, he pleaded with a Minneapolis police officer, Derek Chauvin to get off him because he couldn't breathe- "I can't breathe. My neck hurts, my stomach hurts, everything hurt," he cried out.
However, Derek Chauvin continued kneeling on his neck until he started bleeding through his nose and became unconscious. Even then, Chavin didn't get off of him. 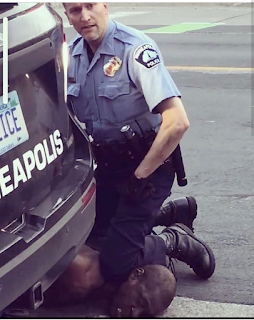 And since his death, series of protests has sprang up in the US, while the incident has sparked a global outcry, anchored on the systematic racism deeply rooted in America.

Now, legendary American rapper, Snoop Dogg has joined other celebrities to condemn the act of injustice and racism sweeping across the American soil, especially against the blacks. He shared a photo mix, comparing how American police treat black and white suspects.

"So nice to the (white ). Mass shoooting suspects minutes after they killed 32 people combined But we die on the spot change gone come fuck marching and. Talking we done talking," he captioned the photos. 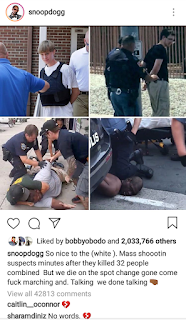 Snoop Dogg who shared a photo collage showing the arrest of 4 men, two of whom are White and two Black. The White men, Dylann Roof and Patrick Crusius, were arrested for mass murder. Yet, photos of their arrest show police treating them with dignity and used no force at all.

Officers even bought Dylann Roof food from Burger King following his calm arrest after he had killed nine African Americans and injured one other in Charleston Church.

In August 2019, Patrick Crusius, 21, killed 23 shoppers and injured 23 others at a branch of Walmart in El Paso, Texas. Yet he was arrested calmly. At the bottom of the photos shared by Snoop are two Black men, Eric Garner killed in 2014 after a police officer put him in a chokehold, and George Floyd killed by police at the age of 46.

Garner and Floyd's death are similar in the sense that police held them down and they screamed "I can't breathe" until they died. In both cases, the police officers didn't listen to their cries for help.

Eric Garner was arrested on suspicion of illegally selling cigarettes on July 17, 2014. He died after a police officer choked him for 15 seconds while he screamed "I can't breathe". George Floyd was arrested On May 25, 2020, after he was suspected of forgery. On Monday night, an employee at a Minneapolis grocery store called police after Floyd allegedly tried to pass a counterfeit $ 20 bill- Police claim Floyd resisted arrest but surveillance footage showing the incident leading up to George Floyd's arrest shows he cooperated with officers, according to Lib.