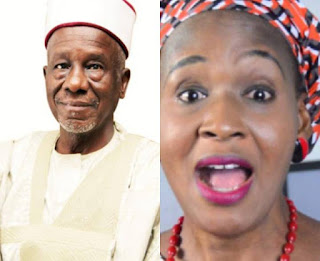 Controversial Nigerian investigative journalist and social commentator, Dr. Kemi Olunloyo has thrown a jab at the late Justice Saleh Dahiru, a former Chief Judge of the Federal Capital Territory (FCT), who is famed for annulling the June 12, 1993 Presidential election in Nigeria after he reportedly died of COVID-19 complications.


Madam is obviously not happy with the late Justice in the roles he played in truncating the country's path to the return of democracy in 1993, in one of the elections adjudged to be the best, freest and fairest in the history of Nigeria, yet was controversial annulled, in a move the late Justice played a significant role. 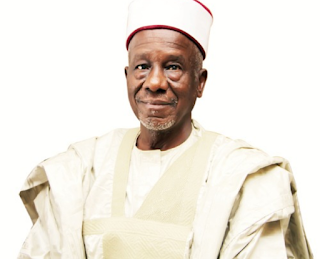 Kemi has left a kind of mockery post on the death of the Justice, which directly translates to the meaning that, he has the authority to annul the June 12 election, and that now, COVID-19 has equally toed same path, using its power to annulled his life too.

Writing on her Twitter, Dr. Kemi wrote: "You annulled Abiola's election on orders ftom IBB. Now you died of COVID-19. God is really punishing those who ruined Nigeria this 2020. #Kemitalks." 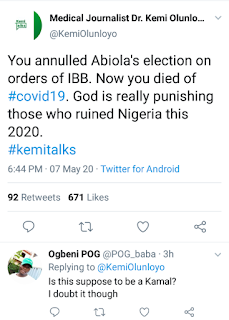 And since the announcement of the death of his death, which took place yesterday, Thursday 7th May, 2020, mixed reactions have trailed the news, with many seemingly in a happy mood over the unfortunate news, because of the pains, trauma, and setback that singular decision plunged the country into.