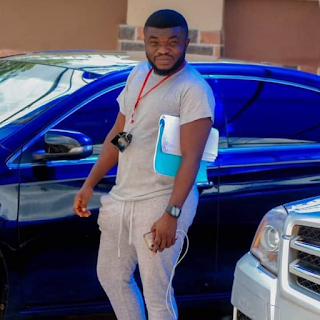 Lagos State is one of the most famous states in Nigeria, with it's huge potentials and great opportunities, that is readily available to be tapped at any given time by anyone, mostly hustlers. Though filled with it's own peculiar characteristics that makes life difficult and uneasy, yet has remained the dream of most Nigerians who seek for greener pastures.


But in spite all it's great attributes, many detests residing in the State for many reasons, depending on individual taste, nature and desire. One of such persons is Nonso Uzozie.

Nonso Uzozie who is a young Nollywood director, film maker and script writer took to his social media page to narrate his bitter experiences while residing in the State. He was particular about the noisy nature of the place which has influenced the lifestyle of most residents of the State. 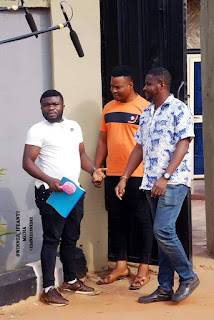 In his narrations, the state is the least for anyone who desires a quiet and decent life. He revealed that most people in the state tend to behave like the nature of the state.
In his words: "Since I left Lagos, I have stopped shouting while on calls, I have stopped running after buses, I have stopped. In short, the madness left me. Entirely."

He went further to advice those planning to relocate to the state to avoid a certain place if he or she truly desires to be happy.
Well, there say 'another man's food is another's poison'. Yes, because it is the dream most hustlers in Nigeria, and even some other African countries, to live in Lagos State, because of it's overflowing opportunities and potentials. 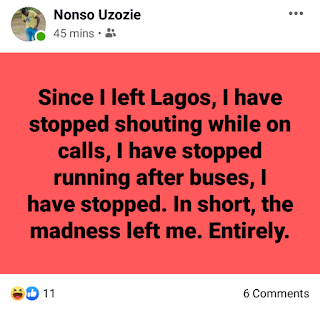 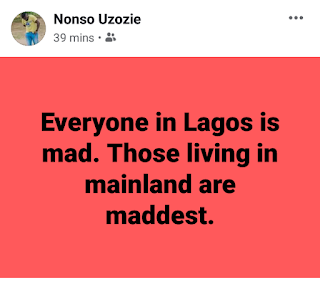 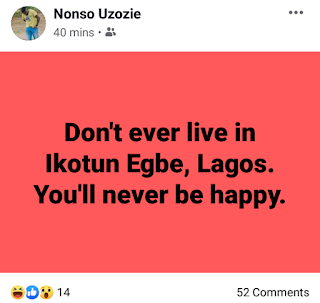 A perfect example is Nigerian artists, especially musicians, who counts it a dream come true, should they relocate to the state to pursue their career in music because of their believe in the opportunities abound in the State.

And inarguably, Lagos State is the commercial hub of the nation, and probably, of the entire Africa, hence, why majority of the multinationals and other great business establishments are located there, and even great personalities, business moguls and the rest happily resides in Lagos State, Nigeria.