Home News/Gist C. Ronaldo Junior is a year older today, and his celebrity dad is not keeping quiet.

C. Ronaldo Junior is a year older today, and his celebrity dad is not keeping quiet. 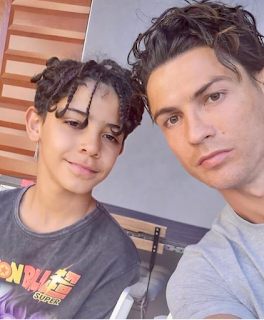 Cristiano Ronaldo, who is fondly called CR7 is a name that rings bell World over, especially when it comes to the world of sports, precisely in the game of football.


Well, he is not in the news this time around for football related issue, but his first son, Cristiano Ronaldo Junior is a year older today, June 17.
His mega star father has already taken to his social media page to celebrate his son on his 10th birthday. Sharing a lovely photo of themselves, CR7 wrote:

"I can't believe my boy is already 10! How time has passed. And you've always been proud of the father who loves you so much. Happy birthday, puppy. Happy day! I love you so much." 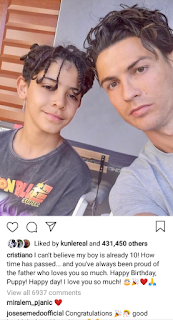 Cristiano Ronaldo Junior has been playing for the Juventus FC academy. He moved along his dad to the Italian side in 2018. And as at October 2019, he has scored 58 goals with 18 assists.
Cristiano Ronaldo (CR7) has four kids at the moment, including a baby girl from his current girl, Georgina Rodriguez.