Home News/Gist I don't need a pussy, I have PhD in blow job- Bobrisky reveals as he unveils different sex positions.

I don't need a pussy, I have PhD in blow job- Bobrisky reveals as he unveils different sex positions. 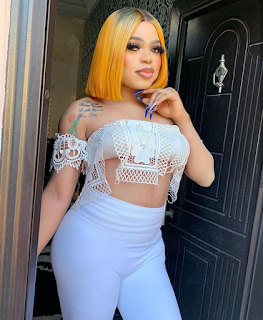 Bobrisky has revealed that he has no need for the female organ because he has a PhD in blow job. He went on to question how female organ has been able to help anybody become better or wealthy.


According to him, "Bobrisky, do you think you can compete with real girls with pussy? Ans: who real pussy help? What happened to my mouth? Me that have PhD in blow job," then ending it with a sigh.

Going further, the queen of controversy admonished girls to spice up their s*x life, urging them to quit their old style of doing it. He then narrated a story of his friend who is complaining that her guy is tired of having it the regular way. 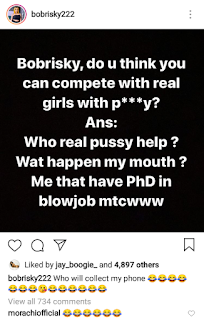 In his words: "Girls spice up your s*x life. Aren't you tired of missionary?"

Continuing, he wrote: "I have a friend that said she doesn't like giving his guy bj. He is tired of your pussy. Give him some bad bj, french kiss. Let me list out some mad style you should try at home with your guy." See the list below... 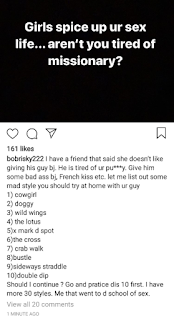