Home News/Gist I have done far more for the blacks than Joe Biden did in the entire 43 years- Trump claims.

I have done far more for the blacks than Joe Biden did in the entire 43 years- Trump claims. 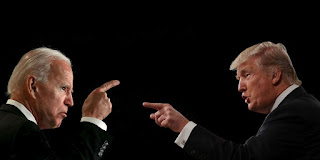 US president, Mr. Donald Trump is trying so hard to remain strong amid all the stumbling blocks standing in his way as the country's Presidential election draws nearer.
This has prompted him to coming hard once again on his perceived strongest opponent, Joe Biden.

In his latest onslaught against Biden, Trump claims to have done more for the black population in the past three and half years than Joe Biden has done in 43 years. He accused Biden of setting the blacks back with his Crime bill.

Further, he claimed equally to have done more for the black Americans more than any U.S. President has done in the history of the country, except for Abraham Lincoln.

"In 3 1/2 years, I've done much more for our black population than Joe Biden has done in 43 years. Actually, he set them back with his Crime bill, which he doesn't even remember.

I've done more for black Americans, in fact, than any President in US history, with the possible exception of another Republican President, the late great Abraham Lincoln...and it's not even close. The Democrats know this, and so does the fake news, but they refuse to write or say it because they are inherently corrupt," he wrote on his social media handle this evening. 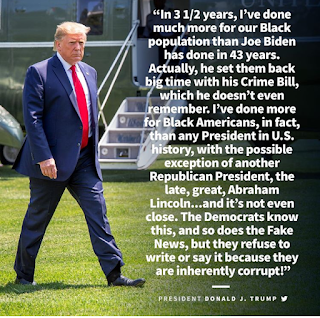 This comes amid the heavy riots, protest and looting currently ongoing across the US, triggered by the death of an African-American, George Flyod, who was murdered by a Minneapolis police officer few days ago.