Home News/Gist Just to probe NDDC the mic is going off, so if it's NNPC, FIRS or CBN then Nigeria will go off- Dr. Penking writes.

Just to probe NDDC the mic is going off, so if it's NNPC, FIRS or CBN then Nigeria will go off- Dr. Penking writes. 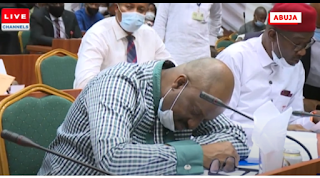 Nigerians must have been shocked to their bones following the deep revelations coming from the Niger Delta Development Commission (NDCC) by both the Senate and the Federal House of Representatives.

The millions and billions of Naira/dollars that have been wrongly spent, mismanaged or embezzled by the top officials of the Commission.

Well, a Nigerian man simply identified as Dr. Penking is surprised that mic is going off just for the probe of a mere NDDC, and he is wondering what will happen should same probe be directed to the Central Bank of Nigeria (CBN), Federal Inland Revenue Service (FIRS) or the Nigerian National Petroleum Corporation (NNPC).

According to him, when such exercise is meted out to the aforementioned government agencies or bodies, then worse scenario will sure play out.

In his words: “Common probing of NDDC they were shouting ' is okay, off your mic!' The day they will probe NNPC, CBN or FIRS ehh, you will hear things like, 'off all camera!' 'off light!' 'off the generator!' 'off Nigeria”. 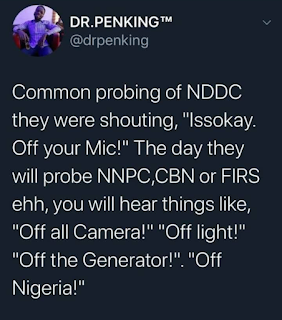 This is coming after the Minister of Niger Delta Affairs, Senator Godswill Akpabio, while appearing before a committee set up by the Federal House of Representatives, alleged that most of the contracts done by NDDC were awarded to the House Members.

Recall that the acting Director of NDDC, Prof. Kemebradikumo Pondei collapsed during a House of Representatives committee hearing as part of a probe into the mismanagement of funds by the commission to the tune of 81.5 billion Naira.