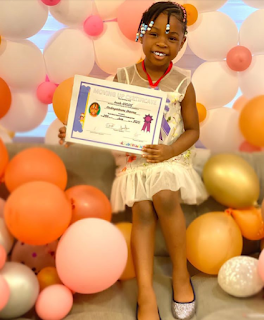 Celebrity daughter, Imade Adeleke who is also the first child of Nigeria music star and DMW boss, David Adeleke, popularly known as Davido has just graduated from Kindergarten and the happy lad took to her social media to share beautiful photos as she celebrates her new feat. 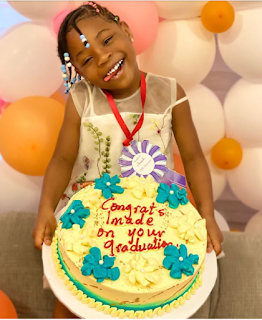 Upon her graduation from Kindergarten, her super star dad, Davido gifted her a new bicycle as a way of congratulating and equally celebrating his lovely and smart daughter.
Sharing photos on her Instagram page and, Imade wrote: "Goodbye Kindergarten. Thank you Dad for my graduation cake and new bicycle." 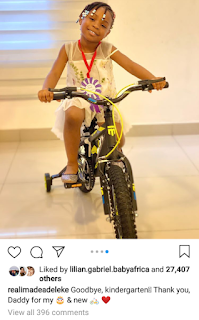 Recall, Imade Adeleke became a subject of battle between the family of Davido and that of her mother, Dele Momodu family. Davido accussed Imade's mum, Sophia Momodu of being an irresponsible mother. This was so because when the then little Imade took ill, her blood sample was taken to the hospital, only for substances suspected to weeds to be found in her blood.

That angered the Adeleke family, as they seized the little Imade from her and attempted taking her to Dubai, where she still stay, without the mother. Well, fortunately, they later resolved the issue and both parents took care of their daughter, though not as a couple.