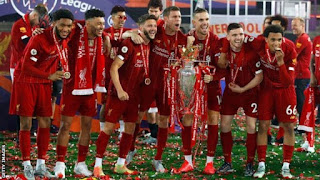 As the current English Premier League is set to end tomorrow Sunday July 25, after its 3 months break occasioned by the abrupt outbreak of the COVID-19 pandemic, plans are already underway for the kickoff of the next league season.

Following the release of the 2020/2021 EPL time table, the campaign will end on 23 May, while the Championship, League One and League Two seasons will culminate on 8 and 9 May. Next season's play-off finals will take place on the final weekend in May. While the regular Championship season concluded on Wednesday, with the play-offs finishing on 4 August.

The Premier League said it would "continue to consult" with the Football Association and EFL "regarding the scheduling of all domestic competitions".

However, the start date for teams still playing in European competitions is still under discussion. It remains possible they will be given a delayed start, given they could be playing well into August.