Home News/Gist You're the best in the universe- Ronaldo's wife, Georgina Rodriguez celebrates him as Juventus emerge Italian Champions.

You're the best in the universe- Ronaldo's wife, Georgina Rodriguez celebrates him as Juventus emerge Italian Champions. 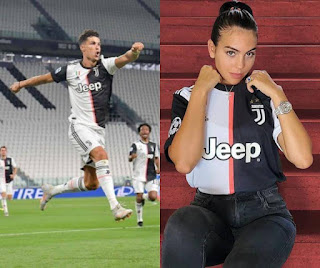 Cristiano Ronaldo's beautiful wife, Georgina Rodriguez has lavished sweet and inspiring words on him, describing the five time Ballon do'r winner as the 'Best in the Universe'.

This comes after Juventus clinched their 9th successive Serie title yesterday, July 26, 2020 after defeating Sampdoria 2-0. Ronaldo had opened scoring in the tail end of the first half before F. Bernardeschi made it two in the 67th minute. 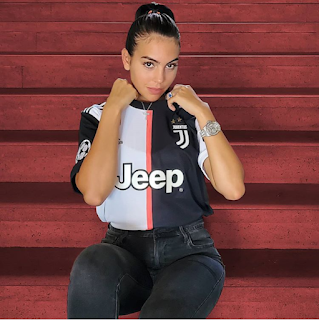 Georgina who also took to her Instagram page to celebrate with her hubby, shared a photo with Ronaldo's kids at home, with the caption: “Union makes strength and today we are Champions. I do not know which words to invent to describe your dedication, what you are, what you project, what you inspire us and overcome what you already are. The Best in the universe. Sigue, keep it up 24h 365 days...year after year. But always worth it. We can't be more proud of you @Cristiano. And we celebrate so.” 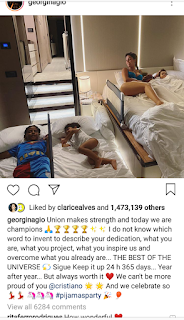 Ronaldo quickly took to his Instagram page to dedicate the title to Juventus fans, especially those battling COVID-19: “Delighted for the second consecutive championship and to continue building the history of this great and splendid club.

This title is dedicated to all you Juventus fans, in particular to those who have suffered and are suffering from the pandemic that has taken us all by surprise by overturning the world...” 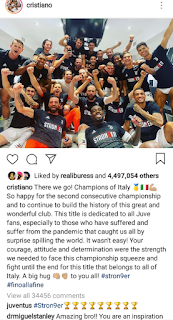