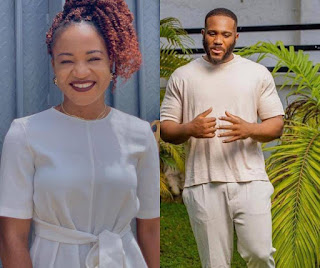 Nigerian female football star, Francisca Ordega has lamented the eviction of her favorite Big Brother Naija housemate, Kiddwaya. The Super Falcons forward is obviously not happy as Kiddwaya was sent packing from the Show.

The former Rivers Angels top shot equally talked about the exit of Erica who was earlier disqualified from the show last week, following her altercation and confrontation with Laycon.

Francisca revealed that both Kiddwaya and Erica is the only reason she dedicates time to watch the biggest reality show in Africa (BBNaija), and that now the two housemates are no more in the show, that she is done watching Big Brother Naija Show.

“Speechless 😭😭😭😭
My two fav.... You two were the reason I watched the show now you’re out and I’m done watching... @kiddwaya I love you, Tiv people loves you and the entire Benue loves you... you and @ericanlewedim where the realest in the house and I’m so proud of y’all... @kiddwaya you have a heart of Gold, I admire your hunger for success...chia you even hustle pass some of us wey no get anything... come home already we are waiting to host you...” 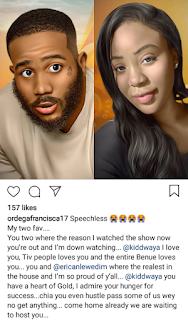